It's been eminently fashionable to bash Sam Zell for his gutting of Tribune Co., and with good reason—a copy of the Baltimore Sun I saw recently looked about as substantial as a cocktail napkin, and that was before the Sun's latest newsroom layoffs. The chain's other papers aren't much better, by all reports.

But Zell's minions have also been doing more innovation than a lot of their counterparts in the industry, fiddling with everything from radical redesigns to ambitious hyperlocal networks. And now Tribune seems ready to unleash its most interesting experiment in reinvention yet: ChicagoNow.
It's a little hard to see exactly what ChicagoNow is up to—the beta site is still very much a work in progress, with a launch promised in a few weeks. But there are strong hints available if you click around the site, and a very promising—even thrilling—description of what's coming in a promotional video here. The ChicagoNow staff is blogging about its progress, too.
At its core, ChicagoNow appears to be an effort to create a new kind of local site by aggregating and curating local bloggers, staff material and other content, with a heavy sprinkling of social features, mobile options and other goodies. The video called it "HuffingtonPost meets Facebook for Chicago," which may be a bit strong, but it's a healthy ambition. This is the sort of source-neutral, smartly curated, aggregation-heavy, social-savvy, distribution-prolific local site that every news organization should be doing. It's what Web-centric companies like HuffingtonPost (which already has its own local Chicago blog/aggregation site) do naturally.
In other words, it's the obvious way to go, the kind of thing people like Jeff Jarvis and I have advocated for years—do what you do best and link to the rest, as Jeff aptly puts it. Phil Anschutz's Examiner.com is quietly building cookie-cutter curated, aggregated sites around the country, and the NBC-owned TV stations are doing the same. But as far as I know, Tribune is the first major newspaper company to take this overdue leap into the future in a major way in its home market—the market it knows best and in which it can bring its expertise and power to bear for readers (and advertisers). Kudos to them. 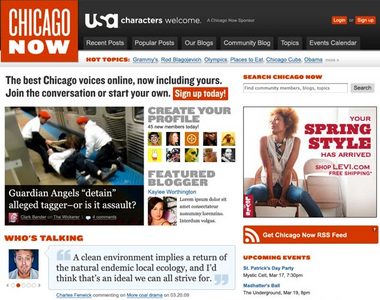 It remains to be seen how ChicagoNow will grow from its sketchy beta—the initial hints of content are good, but it needs an interface, and a good one is shown in a teaser graphic on the home page, reproduced here—but the Zellots are taking a huge step in the right direction. Finally, at long last, something very different than just pasting the newspaper on a screen. (It sure beats weird, timid, token efforts like the NY Times' new "social media editor." Wow. Bold.)
ChicagoNow is probably too late to the game to really help Tribune, alas, given the crappy economics of the newspaper business these days. But at least one of the big publishers is trying something radical, visionary and out of the box. It's about damn time. Everybody else in the industry should be following the development of ChicagoNow closely—and scrambling like crazy to get their own curated, aggregated, social sites ready for their markets.

14 thoughts on “The Future is ChicagoNow”